The NCTA Distinguished Service Award is in recognition of exceptional volunteer service in furthering the goals of the NCTA, and outstanding contributions toward the dream of the North Country Trail. Recipients are individuals who have made significant commitments and accomplishments over eight years or more. These are the 2022 recipients. 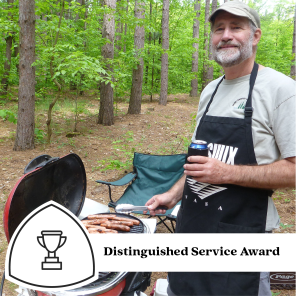 Mike Schaeffer. Mike was one of the founding members of the Grand Traverse Hiking Club Chapter (Mich.). He has served in many leadership roles, including board member, Vice President, and President. Mike is a certified sawyer and has cleared countless trail obstructions. He is a Trail Adopter for a section and cares for the Chapter’s eight kiosks. He also maintains the Chapter’s recorder boxes, where hikers can leave comments. He compiles these comments to help guide the Chapter’s trail improvement work. Mike always helps coordinate and cook at Chapter events, and presents slideshows of his many adventures at monthly Chapter meetings. The Chapter is involved in the Adopt-A-Highway program and Mike rarely misses those meetings. An engineer by trade, Mike has helped build bridges – both literally and figuratively – that will last for many years. 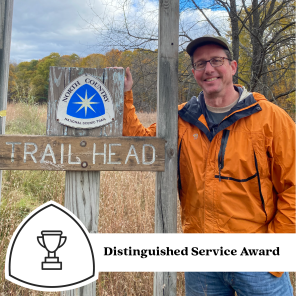 Jaron Nyhof. Jaron joined the NCTA in 2008 and along with his membership renewal form in 2009, he sent a note offering legal assistance with easements. NCTA jumped at the chance to have a lawyer on the team to help protect the Trail. In the years since, Jaron has consulted on dozens of individual easements and agreements. He has worked with Kenny Wawsczyk, NCTA Regional Trail Coordinator for Michigan, on at least six easements. Kenny shared, “Without him, I’m not sure who we would have turned to, as we haven’t had the legal expertise or knowledge of what’s needed for these types of landowner agreements.” Along with trail protection, Jaron has a mind for sound nonprofit governance, including bylaws and Michigan nonprofit law. He assisted NCTA in several bylaws revisions and drafting of templates for Chapters. Jaron joined NCTA’s Board of Directors in 2013 and immediately became Chair of the Trail Protection Committee. He served as the Vice President for four years and President for two. Jaron is genuinely interested in constructive conversations and offers a great sense of humor, putting everyone at ease. He shows endless respect and ensures the quiet voice in the room gets heard. 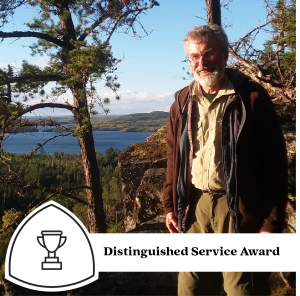 Terry Bernhardt. Terry has dedicated more than 20 years to the NCNST in northern Minnesota. He was instrumental in reorganizing the Kekekabic Trail Club into a NCTA Chapter in 2014. He organized and hosted crew leader trainings in 2017 and 2018 that were critical for the Chapter – new leaders and Chapter board members can be traced to these events. He has coordinated the updating, printing, marketing, and distribution of a Kekekabic Trail guidebook for the past five years. For hikers attempting this section of NCNST, this guidebook is an important resource and continues to receive high praise. Terry has ensured Chapter presence at the Outdoor Adventure Expo in Minneapolis for 15+ years. He also participates in trail clearing activities and provides transportation to volunteers. He is a part of a small volunteer group that kept the Chapter from folding during some very lean, difficult times. The Chapter is stronger in almost every way thanks in part to Terry’s organization. 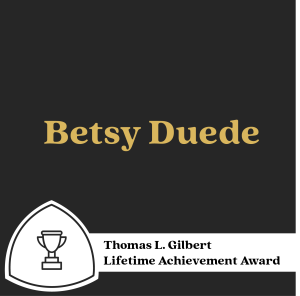 Betsy Duede. Betsy joined the Grand Traverse Hiking Club Chapter (Mich.) in 1999, early in its existence. She began maintaining trail right away, along with doing field research and robust brochure preparation. Betsy and her husband Steve completed all 100 miles of the Chapter’s NCNST in 2012, becoming the 27th and 28th persons to accomplish this. (The list has grown to 91 as of March 2022.) She is a Trail Adopter and several years ago, became the Chapter’s Adopt-a-Trail Coordinator. She remains in this role today, managing 35 adopters and keeping their positions filled. As the adopters work, Betsy compiles their progress into a report, which she uses to coordinate with sawyers for larger trail clearing projects. Despite recent health issues, she continues to admirably and impressively perform her duties. 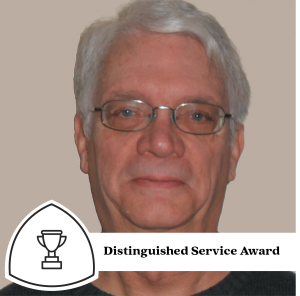 Stephen Walker. Steve discovered the Buckeye Trail Association (BTA) and NCTA when supporting his wife Karen on her hike of the entire Buckeye Trail (BT). He is now President of the BTA’s Board of Trustees and an NCTA board member. Steve led the restoration of a late-1800s house for BTA office space, primarily through volunteer labor and donated materials. He leads the BTA Beall Farmstead Committee, and volunteers to mow its acreage, repair plumbing, and prepare the barn for visitor use. He is a member of the BTA MorelFest team that hosts an annual gathering of 100+ mushroom enthusiasts. He leads and participates in trail maintenance with the BTA Muskingum Lakes Chapter. But Steve’s most significant accomplishments are perhaps what he helps facilitate from idea to reality. He made the BTA Chapter Leadership Council a reality by organizing quarterly meetings of nine Chapters around Ohio, and fostering development of new Chapters. He created both a monthly e-newsletter for the BTA community, and a weekly, internal e-newsletter, in addition to his quarterly BTA Trailblazer magazine articles. He serves as the President of the Ohio Trails Partnership (OTP) and helped form the bipartisan Ohio Legislative Trails Caucus. Steve has truly brought grassroots advocacy to the BTA for the first time.

See all awards categories, past winners, and nomination information at northcountrytrail.org/volunteer-awards.