The Itasca Moraine Chapter covers 75 miles of the North Country Trail in Minnesota between Cass County 125 in the Chippewa National Forest and a point in Itasca State Park defined as the intersection of the Eagle Scout (NCT host trail) and Nicollet Trails. The Chapter took its name from the Itasca Moraine, the dominant landform over which the Trail traverses. Itasca is an end moraine, formed when the Wadena Lobe stopped moving southward and began its retreat at the end of the Wisconsinan glaciation, which took place 75,000 to 10,000 years before the present. Chapter members live throughout Minnesota. Chapter meetings are held in Akeley, Bemidji, Hackensack, Laporte, Park Rapids, Walker and other towns in Northern Minnesota. We invite you to join us for a group hike, workday or Chapter meeting.

The Itasca Moraine Chapter covers 75 miles of the North Country Trail in Minnesota between Cass County 125 in the Chippewa National Forest and a point in Itasca State Park defined as the intersection of the Eagle Scout (NCT host trail) and Nicollet Trails. This boundary was established commensurate with the establishment of the Laurentian Lakes Chapter. Since formation in the spring of 2002, the Chapter has been engaged in extending the NCT from the west boundary of the Chippewa National Forest through the Paul Bunyan State Forest and Hubbard County tax forfeit forestlands toward Itasca State Park. In 2004 a spur trail was developed to a backcountry campsite on Waboose Lake. The campsite has two tent pads, a fire ring and a wilderness latrine. There is an additional spur trail near Nelson Lake. This spur trail goes completely around Nelson Lake thus connecting the NCT to the DNR’s Gulch Lakes Campground. Three additional campsites were added in 2010. Sprinkle Trail Campground is located just east of Parkway Forest Road. Kidney Lake Campground is located 1.5 miles east of Highway 4 and Carter Lake Campground is located just west of Spider Lake Forest Road.

Walker is a small city in North-Central Minnesota, located on Walker Bay along the shores of Leech Lake. The city is the hub of an outdoor recreational mecca featuring the Heartland and Paul Bunyan State Trails and the Shingobee Connection Trail (which form a 22-mile loop bike/hike opportunity), the Chippewa National Forest and the NCNST.

Connect and Get Involved

Use the Report Trail Condition form to alert NCTA and the Chapter to poor trail conditions. Visit the Trail Alerts page while planning your adventure. 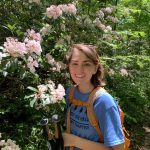