It also has a unique history. Following political advocacy by the Minnesota Federation of Women’s Clubs, concerned about the wholesale loss of forests in northern Minnesota, the Minnesota Forest Reserve was created in 1902 via Congress’ passage of the Morris Act. This legislation dictated disposition of unallotted Obibwe (Chippewa) Reservation lands in Minnesota. The Minnesota Forest Reserve was re-designated as the Minnesota National Forest in 1908 and finally renamed in honor of the Chippewa in 1928. Over the years, additional lands were purchased and the Forest’s boundary adjusted to reach its current size. 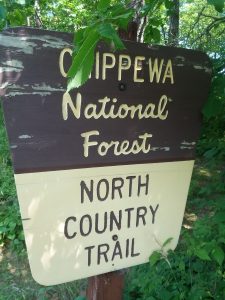 Highlights along the existing NCT in “the Chip” include:

Highlights off the NCT include the “Lost 40,” an old-growth stand of pines near Northome; Camp Rabideau, a restored CCC camp near Blackduck; and the historic Supervisor’s Office in Cass Lake, MN.

With Congress’ passage of the Route Adjustment Act legislation in 2019, many more new miles of the NCT will be constructed in the Chippewa National Forest north of Grand Rapids, MN. Learn more about the history of “the Chip” via the Minnesota DNR or the Forest’s website.