The North Country National Scenic Trail is an absolutely crazy idea. So crazy, people actually volunteer to donate money, time, and labor to make this idea a reality. Mother Nature finds the whole concept rather comical and is constantly devouring all that labor. Still, the crazy idea persists. It’s amazing. My wife and I are members of the NCTA Star of the North Chapter, as well as the Ice Age Trail Alliance. We love hiking. Day hikes, multi-month thru-hikes, it doesn’t matter. They are fantastic. They are life-altering.

This year because of scheduling issues, I was on my own for a thru-hike for the first time. I had a small window of opportunity between wrapping up the summer semester of grad school and starting back to work at my job in special education. Matt Davis, NCTA Regional Trail Coordinator for North Dakota, Minnesota and Wisconsin, was a huge help last year when my wife and I hiked about 130 miles of the North Dakota NCNST, so I went back to him for more advice. He recommended hiking Tamarack National Wildlife Refuge through Chippewa National Forest. That’s 165 miles and I only had eight days to do it. That meant packing light and moving fast. At 53 years old, was I adding more crazy to an already crazy concept? Oh well, game on. 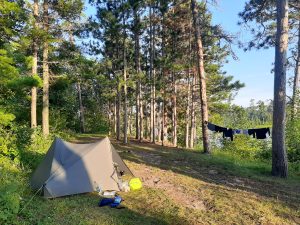 Over the summer I developed my own vegan, whole-food hiking fuel which I called “Kel Cakes.” It’s about 600 calories in four ounces. Seven of these gives me a little over 4,000 calories per day. This allowed me to hike without a stove or any utensils. To train for the hike, I rode my bike as often as possible, logging over 1,500 miles between May 1 and August 1. I also got out and hiked a lot. Beyond the more casual treks, I did two practice hikes of 25 and 27 miles respectively, with a 30-lb. pack to test the gear, legs, and Kel Cakes. Starting in August, I was doing around 1,800 lunges/squats with a 25-lb. pack six days a week.

On August 20, after driving from our home near St. Paul, Minn., my wife dropped me off at Hubble Pond Road [NCNST] trailhead around 10:30 a.m. to start the hike. My pack was around 38 lbs. with 16 of that being Kel Cakes. It was a perfect day for hiking and Tamarack did not disappoint. That was some of the best hiking of my life. Just gorgeous. I was smiling from ear to ear. Sixteen miles later, I was camping at the 400th Avenue trailhead. The great weather and excellent views continued for the next few days. 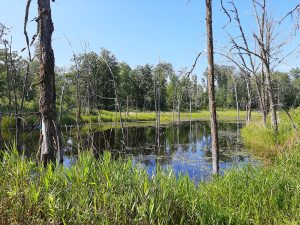 The wildlife tally was nine dear, seven bears, four beavers, three snakes, and one wolf. I lost count of all the swans and other fantastic birds. This was a great trip. I will probably forget about all the mosquitos I battled and the thousands of cobwebs I removed from my face. My current swollen feet and recovering blisters will become humorous stories. I will not forget all the work that NCTA volunteers do to create and maintain this unbelievably crazy idea. I am in deep appreciation of everyone’s efforts. Thank you. I would also like to acknowledge Matt Davis, who has answered so many questions and provided excellent advice. Additionally, the McCartys probably saved my life with their mosquito repellent. Many of those skeeters on the trail just laugh at the concept of DEET, but their bug spray allowed me to retain enough blood to cross the finish line. Additionally, Bruce Johnson of the NCTA Itasca Moraine Chapter, thank you for the wonderful bench tables at the campsites. They are awesome and greatly appreciated. And thank you to everyone who helped build the Amikwik Cabin. That was a pleasure.

Now, it’s back to cleaning gear, figuring out what alterations need to be made for the next hike, and just plain dreaming of where to hike next. Thank you to everyone who works to make these trails happen. You are the best.